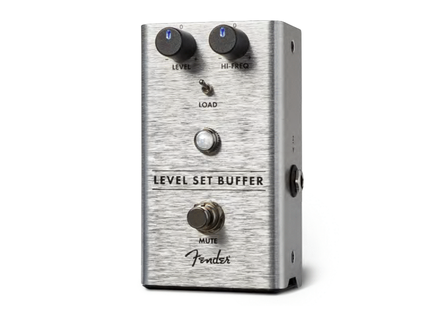 Designed by Fender Vice President of Product Innovation Stan Cotey in Southern California, the Level Set Buffer is a one-stop shop that allows you to easily balance mismatched guitar outputs, so you won't need to adjust your gain settings on a guitar or amplifier mid-set, in addition to maintain signal integrity as it makes its way through a complex pedalboard.

Designed by Fender Vice President of Product Innovation Stan Cotey in Southern California, the Level Set Buffer is a one-stop shop that allows you to easily balance mismatched guitar outputs, so you won’t need to adjust your gain settings on your pedals or amplifier mid-set, in addition to maintaining signal integrity as your tone makes its way through a complex pedalboard.

“The Level-Set Buffer has been in my life as a player for five or six years now,” Cotey said. “It’s a way to adjust levels and tones when you switch to a different guitar. If you’re like me and go through lots of guitar changes during a gig, maybe from guitars that have low-output vintage single-coil tones to guitars with humbuckers, there’s a pretty big disparity with what happens tone-wise. Sometimes the balance between clean sounds and dirty sounds is off.”

“The volume balance between clean and distorted sounds can be pretty far off when switching between guitars with different outputs. The usual way to solve for that is to adjust your pedals quickly and change the drive levels, and then go to your amp and change the drive levels on the different between the channels. So I was thinking about that and a way to have a single place to adjust a guitar’s overall output level as well as being able to add a little brightness if needed, or take some away.”

At its base, the Level Set is a champ at setting the levels to all of the pedals in your rig. It also boasts a mute switch and a dedicated tuner output, so you can have a tuner on the whole time while playing without it actually landing in the signal path.

A Level control with a range of +/- 12 dB brings the volume up or down, so you can turn loud humbuckers down or bring the level of a single-coil guitar up. A High-Frequency control (also with a +/- 12 dB range) adjusts sparkle and sheen. And a Load switch applies a capacitive load that is very similar to the same kind of capacitance your guitar would see plugging into the front end of a tube amp, making your pickups sound a little warmer.

"When [Cotey] first came to me to talk about this, I had never really used a buffer before," Heins said. "I think it's one of those things for guitarists that is mysterious what you'd use it for. But it makes total sense. If I'm switching between my Strat and then something with humbuckers, to balance that out, is a really nice thing."

But as Cotey noted, "It's not trying to make your Strat sound like a humbucker and vice-versa. It just makes them play better together."

To make the Level Set Buffer more player-centric (like all of Fender's effects pedals, Cotey included several pro features that are quite useful on stage or in the studio.

A magnetic battery door allows you to quickly swap 9V batteries, LED illumination ensures you can see where your knobs are set no matter how dark it is and the input and output jacks are not in the same line, so you can space pedals closer together.

While some players might not think of a buffer when assembling their signal chain, the Fender Level Set Bufer can be the key to preserving the guitar-cable-amp tone that you desire, no matter what kind of pickups you're playing.